You are logged in as a CMS user. Return to Site Manager X

The collection includes photographs, playbills, programs, posters, audio and video recordings, along with other memorabilia relating to Mason Johnson’s time at Texas Wesleyan College between 1956 and 1985. An emphasis is placed on the annual spring musicals, including “Brigadoon” (1956), “Damn Yankees” (1961), and “How to Succeed in Business Without Really Trying (1968).”

This project was made possible through a grant from the Institute of Museum and Library Services to the Texas State Library and Archives Commission under the provisions of the Library Services and technology Act. (2017)

A Biography of Mason Johnson

Recognized as a prominent pioneer in the local theatre community, Mason Johnson’s first contribution to Fort Worth theatre commenced in 1956 with the production of “Brigadoon” at Texas Wesleyan. In 1959, Johnson founded the Children’s Theatre at Casa Manana. He was its first dean and planned the curriculum of the classes. In the 1970s he served on the Casa Manana Board of Directors, and he eventually went to serve on the Boards of the Fort Worth Ballet and the Fort Worth Opera.

“Johnson was a driving influence in bringing high-quality professional theatre to Fort Worth,” Louis Sherwood, University archivist, said. “To have the first ever digital collection of Mason Johnson available online, not only benefits students but everyone who might come across them. This is huge for a variety of people ranging from student to history buff, to Hollywood and Broadway producers and performers.” 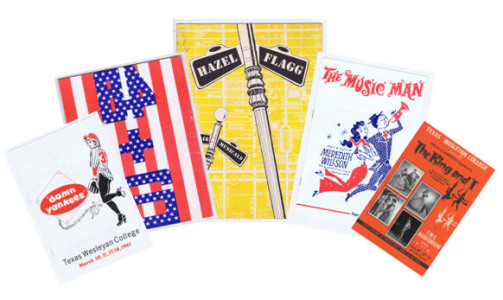 Johnson began pursuing his interest in the arts in the fall of 1939 when he enrolled at the University of Texas at Austin to study drama. His senior year was interrupted by World War II. During the war, Johnson wrote his first musical, “Square Your Hat,” a spoof of navy life, in 1945. After the war, Johnson worked on over 42 shows, many of which he would eventually stage at Texas Wesleyan.

Early productions featured some professional performers as well as Texas Wesleyan students. Wesleyan's musicals became an anticipated community event and were publicized on television from the very beginning in 1955. In addition, they were also promoted and reviewed by the arts columnists in the local newspapers. The theatre program during Johnson's years produced several graduates who went on to have careers on Broadway.

Many alumni will recall the name Mason Johnson, professor of Theatre Arts and Speech at Wesleyan from 1958 to 1985. Depending on the year you graduated, you may know the Mason Johnson who was young and exuberant or the older man who wore a fashionable toupee. Both versions of the man made incredible contributions to the esteemed Texas Wesleyan theatre program, as well as the Fort Worth cultural scene, at large.

If you performed in a TWC production under Mason Johnson’s leadership, you may find photographs, audio recordings, playbills, posters, and other records relating to that production in the collection. Much more material relating to Mason Johnson can be found in Texas Wesleyan University’s Special Collections that has yet to be digitized.

Many photographs in the collection feature individuals who have not been identified. If you know the name of someone in a particular photograph (or if you see someone who has been named incorrectly), please email Caitlin Rookey, digital initiatives librarian, at crookey@txwes.edu.

Special Collections is also interested in curating oral histories relating to Mason Johnson. If you have stories you would like to share, please fill out an inquiry form, and someone will be in touch with you soon with more information.

This is from the quartex-front-end repo.